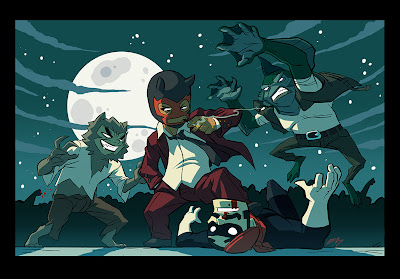 Look at this My first Post anyway this is a piece of fan art I did of Red Demon. He's a member of Luchadores Five. Luchadores Five is part of a Comic anthology Called Lucha Lebre. The comic has been out in Europe for a wile now and it's finally coming out in the States.
The way I found out about the comic is through Vinyl Pulse. They released some awesome Toys a wile back based on Designs Muttpop The artist of the comic.
From the Descriptions and preview pages of the comic an It looks like it will be a fun time.
Luchadores Fighting werewolves, Greaser Gill men, tiki warriors, Latino midget Elvis impersonators and a French gang. Come on what's not to like. I can't wait till September 5 for the released of the first book. The book will be available through Image Comics. So check it out.

CBR did an interview with one of the creators Jerry Frissen
http://www.comicbookresources.com/news/newsitem.cgi?id=11228


For more info about the comic and toys check out
http://www.muttpop.com/