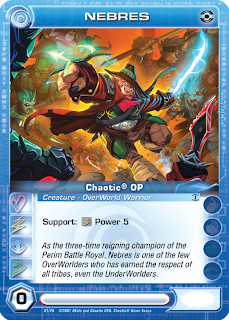 Looking at the Nebres card you wouldn’t think it was a massive undertaking, You wouldn't think it took a week of planning and over a month to complete. So many people worked on this one card 4 Kids Wasn't able to list any of the artists on the actual card. The only credit this card has is “ By ED’s Friends”.
Now you think to you're self why would so much effort be put in to one card. Lets go back to September 2007. At the time TMNT Back to the Sewers was in the beginnings of development And Most of the art staff was working on Chaotic cards. Wile on the job Our good friend and colleague Edwin Nebres Had a stroke. It was a huge shock to the whole team. You would never think that something like that would happen, especially to some one you know. The following week Jason Narvaez and Sam Murakami Called a meeting to come up with a Chaotic card Idea to do in honor of our friend. The plan was to present the final card to him when he was feeling more up to having visitors at the hospital.
The idea for the card was a big brawl that would include a drawing by each one of the art staff. I came up with the idea of it being set in the Underworld Colosseum. Sam and Jason came up with the idea of Nebres being an Overworlder, his character was made a boar creature based on the year he was born, Which was the year of the boar in the Chinese Zodiac. In fact all of the creatures seen in the Nebres card were supposed to be Chinese Zodiac animals. Each based on the years of the artists who drew them. but nobody really stuck to that. Probably the only creature that stuck to the original idea was the one I designed.

Here we have some concept drawings I did. unfortunately I don't have any of the other staff's concepts. 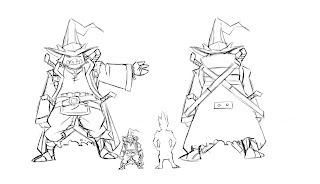 This one is me fleshing out the Nebres character design. I had the idea of combining a lot of the things Ed liked. the version I created had a lot more Asian influences. he also had some aspects from Ed's World of Warcraft character, that he used to draw every so often. I also had an idea that he had 4 swards one for each mugic element, they were supposed to be forged from mugic crystals. So his fiscal attacks were elemental attacks. this idea was shot down cause it might break the card game. you will see in the final design Khary Randolph kept some aspects of the design I did. 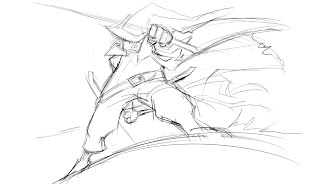 Here is my first stab doing a design for the card. the note on this design was it looks "to poesy" it needed more action. 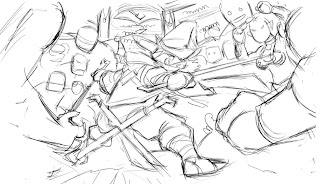 Here is my second try. The note for this was it didn't show the front of the character. 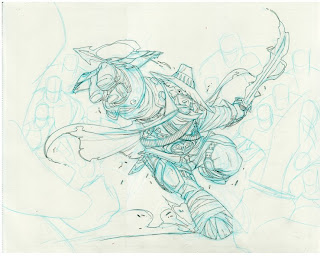 Here is a close to finished sketch done by Khary. He actual incorporated some ideas from my sketches.

here are the lists of artists along with the pieces they did. In order of how they appear on the card. One of the Ideas was that all the characters on this card would eventually become characters in the Chaotic game. 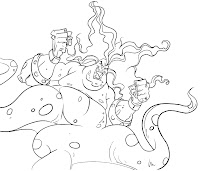 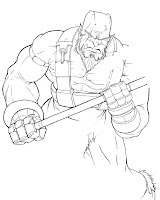 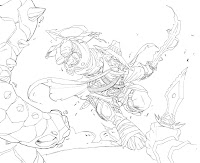 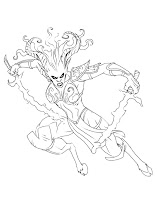 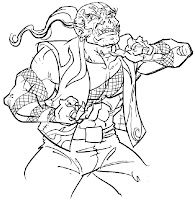 Chris Beaumont
Iparu
Iparau was a character created By Chris For the Chaotic TV show prior to the this card. 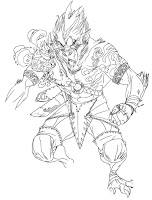 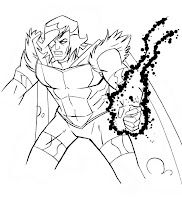 Roy Burdine
I put together the final composite of the Characters drawn by everyone. I also inked a couple of the images so that they match the the others. Kahry finalized the line art, placement and extended some of the characters.

When all the line work was ready I started painting. I first started with Nebres and the two foreground arms. Then I painted the background. After that I moved on to the background characters. I actually wound up fully painting each character. The final color for this piece took me over a week to do. I needed too stay on schedule with Color development on Back to the Sewers, so I pretty much worked on it were ever I could. stayed late, brought it home what ever it took. Once I completed the card it was put on to the final card lay out with flavor text by Sam Murakami.

"As the 3 Time reigning champion of the Perim Battle Royal, Nebres is one of the Few OverWorlders Who has earned the respect of all tribes even the UnderWorlders"

The ultimate tribute to an all around awesome dude. I'm pleased to say Ed really enjoyed all of our hard work and is doing well with his recovery. We all look forward to his return. 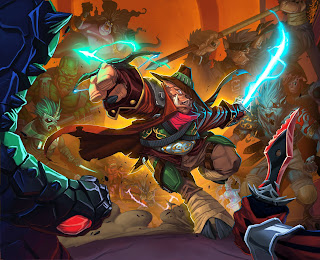