The Thief and the Cobbler 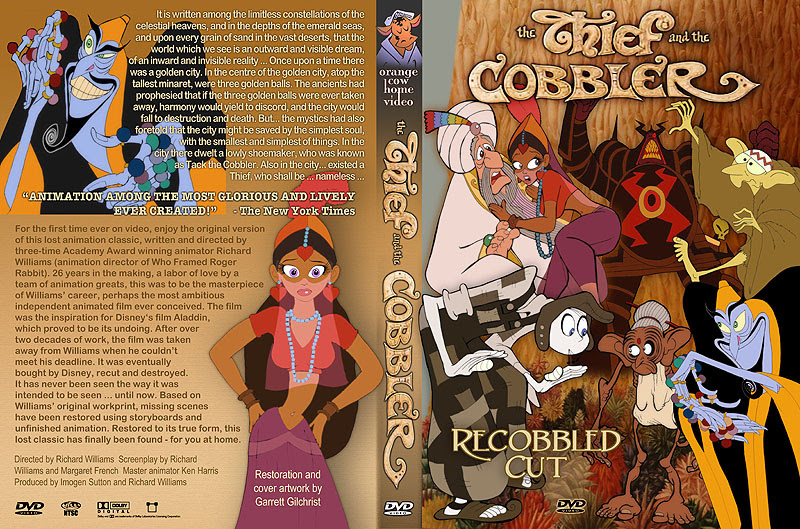 Today I had the Pleasure of seeing The Thief and the Cobbler by Canadian animator Richard Williams. This is quite possibly the greatest animated movie ever made. Probably the smoothest an most ground braking animation I have ever seen to date. Unfortunately it was never finished. This Independent animated film had been and out of production for over two decades. Williams worked on the film for some 26 years beginning the work in the late 60's. In 1990 Williams signed a deal with Warner Brothers to finance and distribute the film. The film wasn't completed in time. and Warner Brothers pulled out with only 15 minutes of the film left to be finished. There are versions of the film that were completed But they are were not the original vision of Williams.
The link I have here is a reconstruction of the film. It is a combination of the many existing cuts and work prints of the film, bringing it closer to its original form. The Video reconstruction is by Garrett Gilchrist. Check it out. (Side note) jest let each clip play it will automatically go to the next sequence in the film.

The Thief and the Cobbler
Posted by E-mann at 4:59 PM 1 comment:

Hey guys,
I am part of a contest on Don't Panic. I was hoping to snag some votes and I would really like your help. You do have to register to vote, I would really appreciate the support.(there is a quick sign up if you scroll down to “New Users can quick register here”.)
I am registered as E-Mann and Have the Guile Image you see above. You can vote one time per day and on multiple pieces. So you can share the love

Any votes would be really appreciated. thanks a lot
Posted by E-mann at 10:42 AM 2 comments: