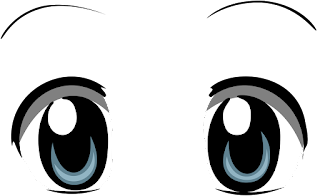 This is Brought on by a great conversation I was having on Facebook with Tony Puryear and Steven Harris.Do you believe the round eyed style used in Japanese comics and animation is some how racist? Is Japanese pop culture training their people to think that narrow eyes have a bad connotation and is unconsciously perpetuating a stereotype that larger eyes on characters is some how good.

Personally, I don't think it does. I thing that the choice to use larger eyes is an aesthetic choice to show the innocence of a character. Studies say that humans are pre programmed to feel more sympathy for things with large eyes like children or animals. In essence the design choice plays on that.